We might have two different terms from the beginning 1.Cross and the cross followers2. Christ and Christ followers300 AD, or some, Emperor Constantine has recognized the Cross as symbol of his Empire .Eastern Roman Empire the Cross symbolHistorical sourcesaccording to Lactantius, Flavius Valerius Constantinus was visited by a dream the night before the battle, where in he was advised "to mark the heavenly sign of God on the shields of his soldiers ... by means of a slanted letter X with the top of its head bent round, he marked Christ on their shields."[1]Lets check ;Here is that symbol : 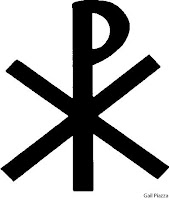 Explanation we read is that is about of superimposed ,not ordinary but Greek letters: "A monogram and symbol for Christ, consisting of the superimposed Greek letters chi (Χ) and rho (Ρ),often embroidered on altar cloths and clerical vestments. Also called Chrismon, Christogram..." [2][chi + rho, first two letters of Greek Khrīstos, Christ.] [3]What is most than strange Greeks today for the Cross will say ;ΣταυρόςNo need to add that Macedonian and all related modern languages of today for Cross will say:Cross -Eng.Krs -Maced.Krst-Bulg.Krst-Serb.Kriz -Croat .And no wonder because here is the root of that word .Krs;X-KS;P-ro;X + P ~> KS + Ro ~> Ro in between K`S ~>K Ro S...we read Kros .Kros or Crossed ,because Ro is present crossed at the middle of dual K`S or X two letters Another words connected with word the Cross in Macedonian are and this :baptism baptize Lets compare:Macedonian :KRST- KRSTI KRSTENJEEnglish :The Cross, baptism baptize Greek :STAVROS Váptisi vaftíseiWhere the root for ever will be at lettersX Ro KRoS

Such a strange ..﻿
So, when we have got a Cross symbol recognized as official state symbol we have to supposed its followers if the word Chrest or KRS or KRST in Macedonians standing for the Cross, than what for word rest -tian could standing for ?-tian or ian would be suffix what does explaining ... or being affiliated with a Cross .Is it historically correct that Constantine firstly accepted the Cross symbol for his own, and for symbol of his Empire , and never accepted Christianity ?Yes it is Then we could state that difference between these two terms is that first term links to second one and that is term Christians.

What was Constantine's native language if indeed he was the grandson of a Danubian goat herder?That indeed is interesting Someone made this kind of point.From Atlantic Ocean up to Persia it is none Latin language dialect.And we are talking about Latin word roots.Strange isn`t
The first crucifix (a figure on a cross) is from the 5th or 6th or 7th century. Before that it appears that there was a LAMB on the cross. Besides the legend of Helena finding the One True Cross and Nails, which is obviously a FAKE legend, when does the cross appear in the archaeology?
Bro lets have this enter ...If we read KRS instead of KRST ,then we could face another root word meaning difference .Firstly I have to explain a bit Word standing for Cross at my Macedonian is exposed with letter t as its ending.Krst = CrossAnd because it is so we analyzed for one more time .KRS instead of KRST What letters KRS could standing for ?And according "to the voice Constantine had heard at its vision" as legends says :"“By this sign, you shall conquer..." or "you shell been unbeatable..." up to the source, historically we need to not to forget , one more thing That`s appearing of the Church. As institution Church it does appear when Constantine recognized Christianity as official state religion .Lets focus at the term Church and its word roots .At Latin Church is Ecclesia,At Greek - Ekklisía At Macedonian is Црква from Черква or using different orthography Ts r k va Ch e r k va .If we hear for one more time pronunciations of symbol as CHI RO , we could agree that indeed it is CHI RO and does mean what ?CHI Ro CHI RO CHU RO CHu Ro CH Church of Course .Where Chi Ro has got its word ending at letter Ch meaning or could mean Chi ro + Ch follower Back to my Macedonian Черква or using different orthography Ts r k va Ch e r k va .from the root KRS We palatalized lettersK-> Ch R S ->K So we have K R S Che R K from Chi Ro K from Chi Ro _______________At this way observed we could say yes they are two different terms trough history heaving two different meanings First word is "Chrestian" meaning the Church followers , second one Christian meaning another thing ..