NOTE: To become a Greek, it was enough to be a Christian! 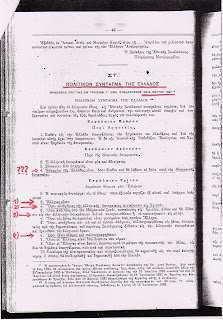 The 1st Constitution of the Greek State, in the year 1827.

??? ---> 4. Provinces of Greece are all those that were taken and will be taken by weapons against the Ottoman Dynasty.

NOTE: To become a Greek, it was enough to be a Christian!

This document proves that Greeks have a very short memory. They do not remember how the Greek State was made and also who the modern Greeks are.
Why should we Macedonians have to prove that we are Macedonians since antiquity when the Greeks do not have to prove anything for being Greeks.
The fact is that about 180 years ago anybody who was a Christian in the Greek State became a Greek automatically, why does that not bother the modern Greeks?
You see, if someone was a Jew or a Muslim or a Catholic, he/she was excluded immediately. Let us now ask ourselves what is Greek racism and were did it come from?
Just read the above document and you will know why, Greek is a manufactured ethnicity.
__________________
Posted by Goce Homer MakeDonski Janevski at 8:37 AM